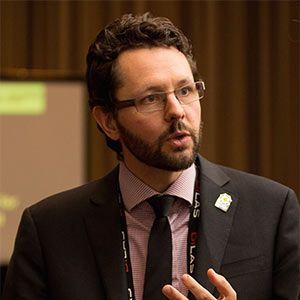 Professor Hutchinson is a Professor within the Adelaide Medical School and is the Director of the ARC Centre of Excellence for Nanoscale BioPhotonics (CNBP; www.cnbp.org.au ).

Professor Hutchinson returned to the University of Adelaide in 2009 as an NHMRC CJ Martin Research Fellow, and established the Neuroimmunopharmacology research laboratory. From 2005 to 2009 Mark worked in the world leading laboratory of Prof Linda Watkins in the Center for Neuroscience at the University of Colorado at Boulder. Here he pioneered with Prof Watkins the research which has led to the discovery of novel drug activity at innate immune receptors.

Mark’s research has implicated the brain immune-like cells in the action of drugs of dependence and the negative side effects of pain treatments.

Mark has published over 130 papers in journals and refereed conference proceedings.

The CNBP is an ARC Centre of Excellence with $42M of funding committed for 7 years, headquartered at The University of Adelaide, with nodes at Macquarie University, Sydney and the RMIT, Melbourne. We are partnered with universities and companies in Europe, the US and China, as well as other Australian institutions.

The CNBP has a mission to “Discover new approaches to measure nano-scale dynamic phenomena in living systems”.

The Scientific Aims of the CNBP are to:

1. Reach the limits of light-based measurement within complex and dynamic biological environments;

2. Exploit physics and multiple scales — nanoscale to macro — using photons to bridge from nanomaterial to devices;

3. Create smart, tailored interfaces between these nanoscale systems and the biochemical environment;

4. Establish new forms of measurement assays that can operate within living organisms;

5. Deploy these assays to address identified challenges in systems including the embryo, brain and blood vessels; and

6. Seek molecular level insight into the mechanisms, processes and functionalities in these biological systems.